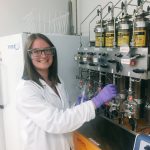 Stanna is from Grayling, MI. She graduated with a B.S. in Chemistry and a B.A. in Music from Hope College in May of 2017, where she performed research under the guidance of Dr. Jeffrey B. Johnson. This involved the development of a rhodium catalyzed cross-coupling reaction resulting in the interconversion of quinolinyl ketones. In the Brown lab, Stanna is currently working on the arylboration of alkenes via Cu/Pd synergistic catalysis. When she is not in the lab, Stanna enjoys reading, playing the flute, singing, volleyball, and kickboxing. 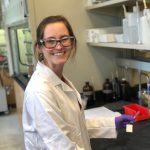 Grace grew up in in Greenwood, Indiana. She completed her undergraduate studies at Marian University where she majored in Chemistry and Biology, doing research with Professor Carl Lecher. Grace then spent a year at UIUC where she completed research under the direction of Professor Kami Hull.  She joined the Brown lab in August 2018 and is now working on nickel-catalyzed alkene difunctionalization. In her free time, she enjoys hiking, reading and running.

“You are never too old to set another goal or to dream a new dream.” – C. S. Lewis 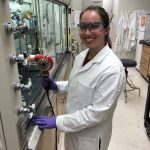 Rachel is from Des Peres, MO, just outside Saint Louis. She graduated with a B.S. in Chemistry from Illinois State University in May of 2018. During her sophomore year, she did crystal engineering research under Professor Chris Hamaker. In her junior year, she explored [5+2] cycloadditions under the supervision of Dr. Andy Mitchell. Finally, during her senior year, she developed new reactions to make carbinolamides for kinetic studies.  In the Brown group, Rachel is currently working on [2+2] cycloadditions. Her hobbies include cooking, classic film, and horseback riding.

“A ship in harbor is safe, but that is not what ships are built for.” – John A. Shedd 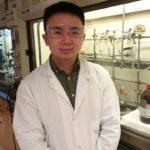 Yanyao is from Chongqing, the “Mountain City” in China. He obtained his B.S. at Nankai University where he did research on organic synthesis methodology with Prof. Mengchun Ye. Then he came to the US and finished his Master study at Rutgers University in 2019. In the Brown lab, he is working on the nickel catalyzed difunctionalization of alkenes. In his spare time, he likes to play games with friends or reading books. 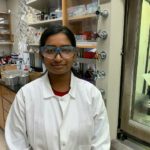 I am from Chandannagar, West Bengal in India. I have completed by B.Sc. in Chemistry Honours from Chandernagore Govt. College, West Bengal in 2016 and MS in chemistry from Indian Institute of Science, Bangalore in 2019. During my masters I have work on Ti(III)-mediated radical cyclization under the supervision of Prof. Tushar Kanti Chakraborty.

In spare time I like to read novels and cook some new recipes. 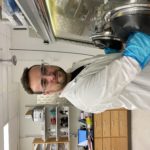 Phillip was born in Kissimmee, FL but he spent most of his life in Alma, AR. He got his B.A. in chemistry at Hendrix College in Conway, AR. His undergraduate research was performed under the direction of Dr. Heidi Dahlmann. His initial work in the Brown group will be focused on nickel catalyzed arylboration of alkenes. Since he moved to Bloomington, he likes trying out the local breweries and the occasional bike ride. 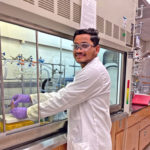 I am Souvik. I am from Tamluk, west Bengal in INDIA. I did my bachelors with Chemistry as the major from Midnapore College (Autonomous). I have completed my MS from Indian Institute of Technology, Bombay. During my masters, I did research on transition metal catalyzed C-H activation reactions under the supervision of Dr. Chandra M.R. Volla. I really enjoy my free time playing Cricket and watching football matches, particularly I am very much passionate about indian football. And I also like to gossip with friends in common tea stalls. I love to eat. My favorite Indian dish is “Chicken Biryani”.

“The secret of change is to focus all of your energy not on fighting the old, but building the new.”- Socrates 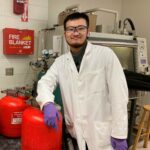 Yanyao grew up in Ma‘anshan, very close to Nanjing. He graduated with B.S. in Chemistry from Nanjing University, where he finished his bachelor thesis, visible-light-driven radical hydrosilylation of mono- and disubstituted allenes, under the instruction of Prof. Shaozhong Wang. Then, he did research on the multifunctional role of Ruppert−Prakash reagent in cascade cyclization, Yanchuan Zhao’s group, SIOC. In 2021 fall, Yanyao joined in Brown Lab, focusing on photochemistry. In free time, he enjoys sleeping, playing video games and barbecue.

“A true master is an eternal student.” — Master Yi 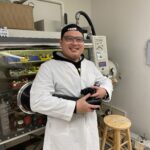 Jeff grew up in Hualien, Taiwan. He completed his B.S. and M.S. from National Tsing Hua University in 2017 and 2019. While at NTHU, Jeff worked under the direction of Prof. Chien-Hong Cheng on the transition metal-catalyzed organic reactions as well as OLED synthesis. After that, he then moved to Dr. Yu-Wen Huang’s group at NTHU to explore total synthesis of complex natural products as a research associate. Jeff joined the Brown Group in 2021 and is currently working on photochemical strain-release cycloaddition. In his free time, he likes playing badminton and traveling. 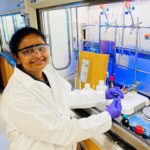 Prashansa is from Sri Lanka. She obtained her bachelor’s degree from the University of Kelaniya, Sri Lanka, where she majored in Botany. In Spring 2017, she entered Eastern Illinois University to pursue her MS under the supervision of Dr. Rebecca Peebles. Prashansa joined the chemistry Ph.D. program at the University of Texas at Dallas in 2019 and joined Dr. Eric Welin’s lab where she mainly worked on a photocatalysis project. After a year and a half, her PI Dr. Welin decided to switch into the industry from academia and upon her PI’s decision, she decided to continue her Ph.D. journey in the chemistry department at Indiana University. She enjoys cooking, watching movies, and listing to music in her free time.

“Everything happens for a reason” – Aristotle