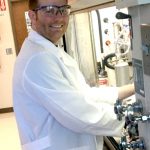 Nathan was born and grew up in Crawfordsville, IN.  In 2011, he earned his B.A in Chemistry from Wabash College, working under Professor Lon Porter Jr. on the applications of porous silicon.  After marrying his fiancée, Bethany, the following summer, they moved together to Columbus, OH entering the Ph.D. program at The Ohio State University.  Focusing on natural product synthesis under the mentorship of Professor Craig Forsyth, Nathan completed the total synthesis of Salvinorin A.  Upon earning his doctorate in May 2016, Nathan and Bethany moved back home to Indiana where he began his post-doctoral adventures with the Brown lab at Indiana University utilizing their developed [2+2] cycloaddition methodology in total synthesis.  When not in the lab, Nathan enjoys playing sports (especially softball), chess, and board games with family and friends, as well as, going out to dinner and movies with his wife. 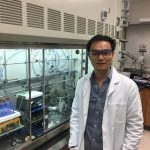 Liang-An was born in Anhui, China and completed his Ph.D. in 2014 at Xiamen University where he performed the exploration of octahedral stereochemistry for asymmetric catalysis with Prof. Eric Meggers. After postdoctoral studies with Prof. James Leighton at Columbia University where he investigated the total synthesis of polyketide natural products, he joined the Brown group in March 2018 as a postdoctoral research fellow. His current research focuses on the Ni-catalyzed difunctionalization of alkenes. He enjoys history, Human geography, and ancient Chinese poetry in his free time. 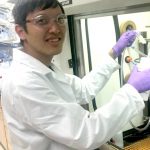 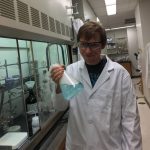 Johannes was born in Idar-Oberstein, Germany. He attended Basel University, Switzerland, where he earned his B.Sc. in 2011. In 2012 he performed his Master’s research in the group of Professor Donna G. Blackmond at The Scripps Research Institute and obtained his M.Sc from Basel University. Before he started his PhD with Professor Thorsten Bach at TU München, he worked for the Novartis Institutes for BioMedical Research for 6 months. In 2016 he received his PhD for his work on C−H activation and pyrrole synthesis. In February 2017 he moved to Indiana University to work with Professor Brown on natural product synthesis as a postdoctoral fellow. Johannes is passionate about football (the one with the round ball), skiing and German beers.

“Whoever is careless with the truth in small matters cannot be trusted with important matters.” − Albert Einstein 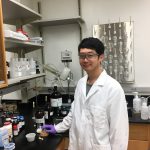 Seewon was born and raised in Seoul, Korea and moved to Daejeon to attend KAIST for his undergraduate studies in Chemistry. As a graduate student in KAIST, he studied natural product synthesis with Prof. Hee-Yoon Lee. Then, he moved to Prof. Sukbok Chang’s group in KAIST as a postdoctoral scholar to investigate the hydrosilylation reactions. After two years, he moved to Prof. Seth Herzon’s group at Yale University to develop antibody-drug-conjugates (ADC) based on syntheses of natural product analogues for a year. He then joined Prof. Brown’s group at Indiana University to develop a transition metal-catalyzed difunctionalization of alkenes. Outside of the lab, he enjoys watching sports and traveling around the US.

“The distance between insanity and genius is measured only by success.” – Bruce Feirstein

Dongshun grew up in Hangzhou, a beautiful city in China, and in 2012 he got a bachelor’s
degree in applied chemistry at Sichuan University. Afterwards, he attended the
Shanghai Institute of Organic Chemistry where he studied the total synthesis of complex alkaloids and
obtained his Ph. D. under the supervision of Prof. Dawei Ma in December 2017.
After one year as an assistant researcher in the Ma group, he joined the Brown group in
January 2019 as a postdoctoral research fellow, and his current research focuses on
enantioselective [4+2] cycloaddition. In his spare time, he enjoys watching movies,
playing billiards and games- king of glory, and learning to cook food.
You don’t have to be great to start, but you have to start to be great.—Zig Ziglar 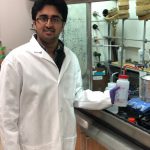 Amit was born and had his early education in Rampurhat, Westbengal, India. He obtained
his B.Sc. and M.Sc. degree from Visva Bharati, Santiniketan. He completed his doctoral
studies in 2018 under supervision of Prof. Santanu Mukherjee at the Indian Institute of
Science (IISc), Bangalore where he focused on developing C-C and C-X bond forming
reactions using organocatalysts and quantum dots. After spending a few months as a research
associate in the Mukherjee lab, he joined the Brown group in Jan 2019 where he is currently
performing various C-H activation reactions using transition metal catalysts. He enjoys his
free time watching movies and spending time with family.
“I learned very early the difference between knowing the name of something and knowing
something.” ― Richard P. Feynman

Maoyun is from Wuhan, China. He received his B.Sc. degree from Central China Normal University and his M.Sc. degree from Nankai University. After several years working experience in pharmaceutical industry, he moved to The Chinese University of Hong Kong and received his Ph.D. degree with Prof. Henry N. C. Wong in 2018. Then he spent two more years postdoctoral research in the same group, in where he finished the total synthesis of Cryptotrione, and one year in the school of pharmacy in the same university. Maoyun joined the Brown group and is now working on metal-catalyzed alkene difunctionalization. In his free time, he enjoys staying with his family, hiking and basketball sports. 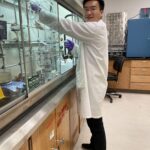 Wang was born in Anhui Province, China and received his bachelor degree from Huainan Normal University in 2014 and master degree from Zhejiang University of Technology in 2017.  Ph.D. degree from Wuhan University in 2020 under the supervision of Professor Guoyin Yin. His research focuses on transformation involving metal migration. In August 2020, he joined Southern University of Science and Technology as a research assistant supervision of Professor Xinyuan Liu, research on the copper-catalyzed asymmetric free radical reactions. In October 2021, he joined the Brown group of Indiana University as a postdoctoral researcher. Currently, his main research direction is photocatalytic cycloaddition reaction. In his spare time, he likes to watch movies, play basketball, climb mountains, etc.

“Success is not final, failure is not fatal: it is the courage to continue that counts- Winston Churchill